What if every apocalypse scenario happened at the same time?

Welcome to LVL99: AxeRage, a gratuitously violent 2D Action-Platformer inspired by the iconic pop culture of the 80s and 90s. Based in a fictional Chile, this righteously brutal ode-to-Arcades is heavily saturated with references to many of the nostalgic low-budget B movies, old school anime shows, and classic SNES era platformers that we know and love. Coming summer 2019 to Steam.

Enter the fray as Cheins Tsurya, an axe-wielding renegade firefighter who must face an unholy apocalyptic menagerie warring over Earth's vital energy. With brute force, a little supernatural intervention by some indigenous Chilean deities, and a RADioactive dog, players must free Earth from unrelenting hordes of aliens, robots, and zombies, oh my. AxeRage will also offer 2P Mode for the players who appreciate the comradery of a couch co-op, introducing the gun-toting Tyrius Domain inspired by Terminator's Kyle Reese.

Gameplay is a close combat gorefest full of combos, plenty of hack and slash, and more platforming than you can shake an axe at. Take out waves of baddies with a diverse array of moves like Axe Uppercuts, Dive Kicks, Slides, and some pretty gnarly Special Moves that rock a blast-to-the-past feel with some modernized digital physics.

"What if every apocalypse scenario happened at the same time?" Beginning as an impromptu concept mused among college friends, AxeRage is the brainchild of the Chilean dev team, Master U.O.M.U. This like-minded trio has a heavy affinity for the iconically violent pop culture of the 80s and 90s, heavily channeling low-budget B movies, old school anime, and classic SNES era platformers into the game. Wanting to revive the soul of the retro action arcade games, Master U.O.M.U. has truly mastered recreating the challenging gameplay associated with the nostalgic games of their childhood. The development of AxeRage started in 2015 and is expected to be complete Summer 2019.

Born November 8, 1984 in Santiago, Chile. Introduced to video games at a very young age, Nicolás claims that they helped him to better relate to people and make lasting, healthy friendships. Because of this, a deep-seated interest in the craft of video game development was instilled in him. "I love video games, I'm passionate about them. Why stop there?"

Born October 10, 1984 in Santiago, Chile. Felipe has been drawn to art and addicted to the NES since childhood. He often found school to be dull and eagerly awaited returning home to his drawings and Nintendo classics. Claiming that those were the "best years of his life", Felipe aims to revive a passion for retro-style gaming in the modern gaming society.

Born March 20, 1983 in La Serena, Chile. For as long as he can remember, Felipe has always been attuned to the graphics arts, especially anything to do with images on a screen. Heavily inspired by the old school anime and video games of the 80's, his art style is a wonderful amalgamate of modernized 16-bit arcade.

"What would happen if all apocalypse scenarios occurred at the same time?"

LVL99: AxeRage drops us at ground zero right in the heart of that question. We’re thrilled to be partnering with the creators, Master U.O.M.U., to bring their brutally challenging 2D Action-Platformer to console and PC early next year (official dates are TBA - follow us on Twitter to stay up-to-date!)

Inspired by movies and video games of the 80s, when action was bloody and gameplay unforgiving, LVL99: AxeRage thrusts you deep into the midst of destruction. Take the axe as Cheins, a renegade firefighter raging to save his homeland, and battle tirelessly against converging apocalyptic scenarios unleashed by warring alien factions.

Cheins is brave enough to step on the cape of an alien overlord, and angry enough to beat him up if he says anything about it.

With brute force, some Selk’nam deity supernatural intervention, and a radioactive dog, players will free the earth from unrelenting waves of zombies, mutant monsters, and evil robotic aliens. For fans of multiplayer, AxeRage will offer a 2P Mode for intense couch co-op sessions. 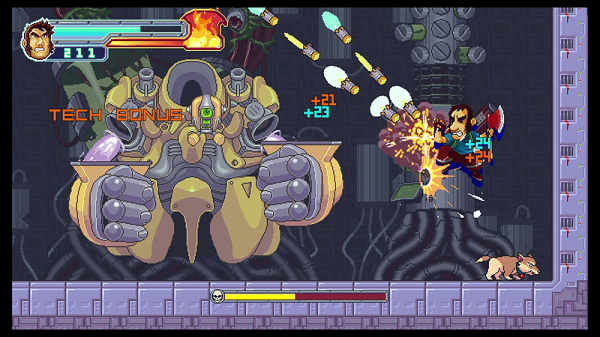 While it's currently still in development, Master U.O.M.U. (Union Of Master U.O.M.U., for the uninitiated) is gearing up to release the hyper-challenging LVL99: AxeRage experience upon the world in Q1 2019. The team is comprised of a tight-knit band of long-time friends hailing from Santiago, Chile. Catch the three of them on Twitter: @Omegachainoboy (Artist), @Don_Brutalo (Lead Developer), and @FelipeChoque (Artist).

Press kit and other juicy assets can be found here: dropbox.com/AxeRage

My goodness these are some sweet GIFs.